Mars is the 4th planet in the Solar system and one of six other inhabited solar bodies besides Earth and the Moon. The primary inhabitants are mainly Aliens including Otsutsuki and Ikarashi Clansmen.

Mars is a very dry desert planet with very little plant life. The atmosphere is breathable and a god tree once did stand on this planet but like Earth's, it has been lost to time. The planet has very little natural energy because of its arid and near-lifeless climate. Despite this, it has plentiful amounts of natural energy and chakra particles. Rainfall is very scarce and temperatures vary widely from day to night and by latitude. There are also severe wind and dust storms that occasionally plague the desolate surface.

Nearly all water sources lie within the ice caps or within the ground. There are places where water reaches the surface in the lowlands which are known as Oasis. Most water is recycled underground by natural processes and rainfall is very scarce. It only rains less than 10 inches a year on average. 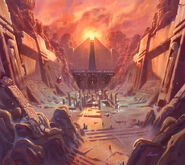