View source
watch 01:36
We're Getting Mutants in the MCU - The Loop
Do you like this video?
Play Sound

Sage Mode is an empowered state that can be entered by blending natural energy with one's chakra, creating senjutsu chakra. Sage Mode allows users to tap into the natural force of the world, opening up new techniques to them and allowing them to power up existing ones with the new senjutsu chakra.

Sage Mode is known to be taught in three places: at Mount Myōboku by the toads, Ryūchi Cave by the snakes, and at Mount Koryū by the dragons. Users of Sage Mode must possess "extreme chakra levels" to invoke senjutsu.[1] It is also important that their bodies be strong enough to support the increased power.[2]

In order to enter Sage Mode, the gatherer must remain absolutely still in order to be one with nature and balance the natural energy with their own physical and spiritual energies.[3] If the user puts too little natural energy into using senjutsu, the technique will not work.[4] Conversely, if too much natural energy is taken in, their body will turn to stone forever; humans will also be transformed into whichever animal's school the senjutsu was learned from.[5]

The toads of Mount Myōboku have devised several tools to make learning Sage Mode easier. By applying a special oil, the applicant's body will start passively taking in natural energy. This oil will evaporate if taken outside Mount Myōboku, thus rendering it useful only for learning purposes. The toads also have a special staff that, when struck with, knocks all the natural energy out of the gatherer, thus reversing any transformations before they can become permanent and the user turns to stone.

At Ryūchi Cave, one must be bitten by the White Snake Sage, who injects them with natural energy. According to legend, if one's body is strong enough to withstand this snake transformation, it will accept the power without reservation, thus granting the person Sage Mode. If not, the snake will devour the person whole.[6]

The Dragons of Mount Koryū like the toad have devised several tools to make learning Sage Mode easier. By bathing in the pools at the four elemental areas and meditating in the ritual temple at then center of the mountain which are abundant in mostly natural energy and chakra, thus the applicant's body will start passively taking in natural energy.

These weaknesses, however, can be compensated for through various methods and techniques such as:

Users that can properly balance their own chakra with natural energy will not experience any animalistic transformations to their body. The one exception is a dark pigmentation around their eyes and the eyes themselves, which usually differ based on where the user learned Sage Mode. 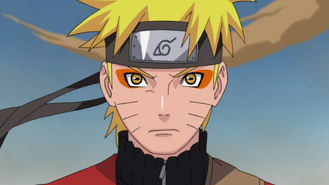 After earning the Nine-Tails' cooperation, Naruto becomes able to combine Sage Mode with his Tailed Beast Mode. The red irides turn orange, and the slitted pupils characteristic of normal Nine-Tails transformations merge with the Sage Mode's eye pattern, creating a design reminiscent of a cross. The design of Naruto's shroud also changes. While using the combined form, Naruto gains simultaneous access to both forms' advantages, such as augmenting Tailed Beast Balls with senjutsu chakra.[13] The combination of both forms allows for a greater power than either Tailed Beast Mode or Sage Mode individually, which allowed Naruto to hold his own against the likes of Obito Uchiha as the Ten-Tails' Jinchūriki.[14] Two years after the War, Naruto's skill with this form had increased to the point where he could fly within it, and easily shatter Truth-Seeking Ball's during his battle with Toneri Ōtsutsuki.[15]