Shinachiku Uzumaki is a shinobi of Konohagakure. He is the first born of Sakura Haruno and Naruto Uzumaki

His personality varies from person to person, but he’s often described as being very similar to his grandfather, Minato Namikaze, but if appropriately provoked, his mother’s temper. He is a relatively relaxed and calm individual. People who meet him for the first time either perceive him as serious or air-headed.

The world has changed a lot since Naruto took power. As Naruto spreads his vision of peace throughout the land, darkness and suffering still lurks underneath. All the lose ends left behind comes to the surface bringing chaos across the nations. A mysterious man calling himself the “True Fox” appears, vowing to bring true peace to their world. But first, Uzumaki Naruto must fall.

Tied by politics and rules, it’s up to Shinachiku’s generation to discover the truth and save the only world they’ve ever known from falling to darkness once more.

THE FIRST – Naruto the Fanfic

The story begins short while from ch. 700 Naruto has the most stressful week as the hokage. First his son disobeys, then there’s a strange figure lurking around him. And to top it all there’s weird vibe that something isn’t really right here. The young nanadaime of a vast konoha city goes through this experience trying to sort out reality from dreams and illusions. Has he stepped from the wrong side of the bed? Or is someone messing with him?

Shinachiku Kettōden is an introduction to new Naruto's generation that comes from the same universe as Hisedai. It goes back in time to further explore Uzumaki clan and Naruto's past

A Naruto AU compiled by artist PumiiH that compiles the stories of Shinachiku and other new generation children.

Anzu Uchiha wants to realize one of her dream and her bestfriend-first-crush Shinachiku Uzumaki will get a girlfriend. Here relationship between Anzu and Shinachiku will change .

24 years after the Fourth Great Shinobi War, Naruto is now the Hokage and for years has tried through alliances and agreements between nations and villages to break the chain of hatred and change the ninja system completely. Over time, although there have been changes and great achievements, the widespread discontent among some small villages have hindered the birth of a new era. Furious and fearful of losing their only source of economic

The technology and the modernization of the cities is finishing with the ninjas of the village of Konoha and other countries, this will be the last generation to be legend.

Accompany Orenji Uzumaki, Shinachiku Uzumaki and his friends on their adventures for trying to earn a spot on the wall of fame of the best ninja in history.

Assumed to be the timeline Shinachiku was born in.

A blog dedicated to answering random questions about Shinachiku and his world. 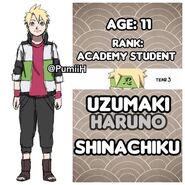 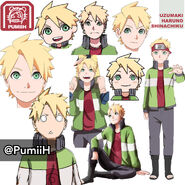