Shinoa Hakurei is a

and is a member of the Hakurei Family.

Shinoa Hakurei was born into the Hakurei family. It is common in her family to be born with a naturally low amount of Chakra, which means they are practically useless when it comes to Ninjutsu and Genjutsu. No Hakurei has been a Shinobi for generations.

Together with her mother, Shinoa currently lives in a run-down flat close to the border of Konoha. They often have to move due to her mother getting into arguments with the lessors, because they sometimes can't pay the rent in time. All in all, they are a very poor family. Her father has died of a sickness shortly after Shinoa's birth. This contributed to their poverty. Her mother runs a shop that doesn't really do well, but she doesn't want to give it up since it was the only thing that reminded her of her deceased husband. She cares a lot for Shinoa, but she fails at understanding her duties and responsibilities as a mother, for example she refuses to find a better job to enhance their living conditions, and she often leaves her by herself. After all, Shinoa decides to become a Ninja, to be able to make a living. Her mother is very much against this idea, because she believes she will fail the graduation exams, but after seeing her daughter's determination to become a ninja she let her enroll in the academy.

Shinoa is a very hardworking and ambitious girl that tries her best to become a full-fledged Kunoichi even though she's naturally disadvantaged due to her lack of Chakra. This motivates Shinoa a lot to do her best, but also drags her down when she fails at something, sparking self-doubt in her, but after getting advice from Boruto Uzumaki, she gains more confidence even when facing something difficult.

Since she's coming from a really poor family she's doing everything that's possible to get out of her miserable living conditions. She's extremely focused on doing well in the academy and studies a lot.

When it comes to people, Shinoa is quick to get awkward. She's bad at interacting with people she doesn't know and it's hard for her to keep a conversation going. When she gets to know somebody though she opens up after a while and loosens up a bit. Before enrolling into the academy she always preferred to be alone, mostly somewhere outside since she can't stand being at home. She finds joy in playing video games and reading manga.

After becoming friends with some people at the academy she starts hanging out with them sometimes. But she hardly finds the energy to do something exhausting after school. She's quickly tired out after a day at the academy. She's only down for activities such as eating somewhere or playing videogames.

In general she always seems tired as she often has to yawn.

Shinoa is also that kind of person that doesn't like to show her feelings openly. She'd never get riled up about something petty, even though she's bothered by it. When she has an issue with somebody she'd give that person the silent treatment, or would avoid them completely.

Still, she's very picky about things and hard to motivate to do something she doesn't like unless they benefit her, such as studying. She has a problem with turning people who ask her for a favor down and sometimes loads herself with more work than she's capable to fulfill. She's also very honest towards people, though she'd always keep her thoughts to herself unless she's directly asked for her opinion. When she's trying to tell a lie, it's always terribly obvious. She's a bad liar and gets nervous easily, which is extremely openly visible.

All in all she's more of an introvert who doesn't want to be at the center of attention, even though she doesn't dislike building up relationships with others. She just finds it hard to start a connection with someone. When somebody approaches her she behaves awkward at first until she's getting comfortable with their presence.

Shinoa Hakurei was born with a very little amount of chakra, hence she can't really use ninjustu or genjutsu without getting too exhausted to fight, this is why she relies heavily on Taijutsu and after training with
Rock Lee
and his son
Metal Lee
she became a master of Taijustu and a ninja who relies heavily on using taijutsu in a fight. Although she is very knowngeble of poisons, and wounds and illnesses and how to treat them mostly herbs and a little medical ninjutsu and regeneration justu. She also posses a special power in her silver eyes and can use the Summoning Technique.

By age 13, Shinoa's intense training regimen transformed her into essentially powerful taijutsu master, showing great proficiency in the Strong Fist fighting style. Her strength could take down at least one or two mountains with a single kick or punch, and speed fast enough to outpace natural talents. As an teen Shinoa is considered one of Konoha's best female taijutsu users.

Through Lee's teachings, Shinoa learned to open five of the Eight Gates at age 12, the sixth, seventh, and eighth gate at age 15. With each gate she opens, Shinoa's strength, speed, chakra levels, and bodily functions increase tremendously. However, the longer she maintains any of these gates, the more strain and potential physical damage she puts on herself from pushing her performance so far behind her natural limits. For this reason, Shinoa is only permitted to open any of the gates during the most dire situation or to protect something or someone that she loves. Through her continued training, Shinoa is able to open some of the Eight Gates instantly and shows a faster recovery rate from using them. Shinoa has learned to use a number of taijutsu techniques that she can perform once certain gates have been opened; with the first gate, she can use the pile-driving Front Lotus; with the third gate, she can use the more destructive Reverse Lotus; with the sixth gate, she can perform the Crane Wing Formation in collaboration with other Taijustu masters.

When training with Lee, Shinoa developed the Seven Gates, and was able to unlock four of the seven Gates at the age of 14 and the remaining three at the age of 16. With each gate she is given access to more and more of their body's chakra, thus enhancing her senses, increasing their physical strength, speed, and power. However, The higher the numbered chakra point is the more chakra Shinoa is granted which puts a strain on the body. So, Shinoa is only permitted to open any of the gates during the most dire situation or to protect something or someone that she loves. Through her immense training regimen, Shinoa is able to open some of the Seven Gates instantly and shows a faster recovery rate from using them.

Although Shinoa possess very little skill in ninjutsu, she can still perform basic chakra control skills, like using chakra to walk on vertical surfaces, as well as water, use transformation, and summoning justu. She also developed enough skill to dispel genjutsu.

Shinoa was created by Junoori on Toyhouse and Deviantart. 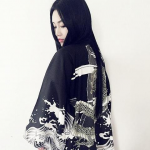