Following the years spent away from the Hidden Leaf Village, Takashi's appearance has changed and matured considerably from a child to that of a young man in his late teens with a clean-shaven face and sharp facial features. At 6'2", he is relatively taller than many people he knows and has tanned skin due to having spent so much time under the sun with a lean frame that has been stripped of fat or excess skin, leaving a muscular and well-toned body with broad shoulders leading to well-built arms. Takashi is stated by many to be very handsome and often gains the attention of several women though he himself tends not to notice this. He also cuts his hair to a much shorter length

As a result of being from Madara Uchiha's blood line on his mother's side and the current reincarnation of Indra Ōtsutsuki‎, Takashi's chakra has been described as "quite powerful and unusually large". As child, he was capable of performing the Fire Style: Fireball Jutsu with relative ease and could later perform several jutsu during his time as a Academy Student. As a Genin, Takashi was able to use jutsu such as *** multiple times in a single day without showing any signs of fatigue.

While Takashi tends to fall back on the use of ninjutsu in combat, he is considered an exceptionally skilled taijutsu user as he is capable of holding his own against large groups of enemies and against multiple opponents at once. Even without using chakra, his physical abilities are already greater than average with his strength enabling him to easily smash a stone wall after angrily punching it. His stamina and ability to recover lets him to continue fighting for extends periods of time and get back into fight after several minutes.

Takashi is adept at using the Summoning Technique which he uses to summon dragons as the Dragonway clans signature summon and uses them for flight, aerial reconnaissance, to attack larger or multiple enemies or as a form of defense. He is also able to summon snakes for similar purposes though he more commonly uses the more smaller ones to gather information.

Being able to use four of the five basic Nature Transformations such as Fire, Lightning, Water, Earth including Ying and Yang release, Takashi has a natural affinity for Fire Release as is common among the Uchiha and could perform the clans signature Fire Style: Fireball Jutsu on his first try. He could also a variety of other fire-based techniques including Fire Style: Bomb Blast Dance, Fire Style: Flame Hurricane, Fire Style: Dragon Flame and Fire Style: Majestic Destroyer Flame.

While preferring the use of ninjutsu and taijutsu to fight opponents, he was trained with a variety of different ninja tools to help him in a fight and is able to use many of them to great effect. He is skilled in the use of shurikenjutsu, able to cause shuriken and kunai he throws to bounce of objects and hitting targets that others wouldn't be able to do so.

As a result of Takashi's large chakra reserves, he has the potential of learning and using Senjutsu

Takashi initially had no knowledge of Senjutsu nor how to utilize it though **** stated that he had a hidden potential to use it which, combined with his large chakra reserves, later caused him to be taken to **** where he trained for two-and-a-half years. As a result,

While undergoing training with the Dragons for two-and-a-half years, he was taught how to use senjutsu which was only made possible due to his large chakra reserves and was able to perfectly balance natural energy with his on chakra, allowing him to enter a complete Sage Mode. In

n this mode, thick intricate scale-like patterns cover the outer edges of his face, underneath and around his eyes, extending down from the side of his neck and onto the rest of his body where they are shown to be more uniform as they get farther from the central portion of his body which instead bear several scattered, distinct scales, elongated and placed diagonally. This causes

Takashi, like several members of the Uchiha Clan, inherited the clans dōjutsu kekkei genkai known as the Sharingan and awakened it in both eyes at the relatively young age of ten when he was reunited with his father after the latters year long mission. As noted by Ryuko, Takashi's Sharingan was surprisingly matured as both eyes already possessed two tomoe while having considerable skill in the dōjutsu's "Eye of Insight" abilities. However, it was also noted by his father that he had a difficult time in using the Sharingan's ability to see the flow of chakra and its Genjutsu. This was further proven when Takashi added that neither abilities came as naturally to him. It wasn't until sometime during his training with **** that he finally awakened the third tomoe in both eyes and could use all of the Sharingan's generic abilities with much more ease.

At the age of 17, Takashi awakened the Mangekyō Sharingan after finding out about the death of his older brother Akira. It's design is that of two shuriken-like patterns around the pupils overlapping each other with three elongated tomoe set between the spaces. While retaining all of the Sharingan's generic abilities and the "straight tomoe" of his Mangekyō Sharingan granting him fluidity in his movements while fighting, it also grants him new abilities; with his left Mangekyō, Takashi can create and shape Amaterasu that can be shaped into a variety of forms for either offense or defense. With his right Mangekyō, he can . It wasn't until he had his brother's eyes transplanted after overuse of his Mangekyō Sharingan nearly left him blind that he gained.

Like all Mangekyō Sharingan users, not only did Takashi retain all the generic abilities that the regular Sharingan bestows but he also gains more powerful abilities outside the former with each one being tied to a specific eye. With his right Mangekyō, Takashi is able to combine separate nature transformations together and perform nature-based jutsu . With his left Mangekyō, he is able to use Hinokagutsuchi 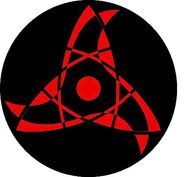 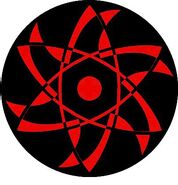 Due to having awakened the Mangekyō in both his eyes, Takashi can use Susanoo with its most common manifestation being its dark blue skeletal form

It's humanoid form is quite different from its first stage as it has the appearance of a large, demonic-like beast

n its humanoid form, he is able to manifest its features such as the ribs for defense or its limbs to interact with his surroundings. It's upper half is quite different than other Susanoo as the Susanoo is more flame-like with a demonic/animalistic look to it including a pair of horns, elongated canine teeth in its upper jaw that protrude downwards, claws and two Mangekyō-like shapes on both shoulders and forearms. This continues even in its humanoid form and it wasn't until it gained it's armor that the Susanoo's appearance changes again. It appears more 'normal' and loses it's flame-like appearance though it retains some of its demonic features with an opened-face helmet that has horns curved along the sides and it's left arm having a gauntlet-like appearance while the right arm has a similar look to it but has three clawed digits with a sheath-like attachment 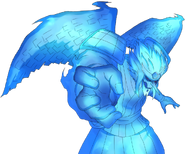 While Takashi tends to rely more on his use of ninjutsu and physical abilities, he is noted by **** to be quite smart.

Community content is available under CC-BY-SA unless otherwise noted.